Originally the OSU Solar Vehicle Team (OSUSVT) Phoenix Solar Racing evolved from an Electrathon racing team created in 2005 under the direction of a small group of undergraduates. In 2015, the OSUSVT parted ways with the OSU College of Engineering and became an independent non-profit organization. It is worth noting that students didn't forget to study and get involved in school life. Don't forget, if you have problems with time, or material that you missed for one reason or another, you can always use special services and get help with capstone project. Since its inception, Phoenix Solar Racing has built and raced three cars and is currently designing and building it's fourth. 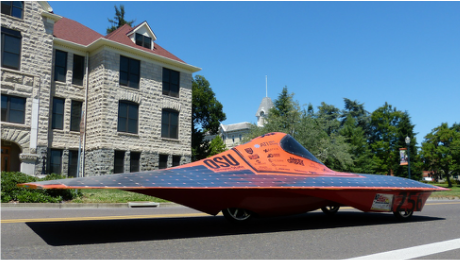 Following the success of the 2012 ASC, the team continued on to compete in 2013 Formula Sun Grand Prix (FSGP). In what turned out to be the closest race in the FSGP's 13-year history, the Phoenix took first place in the 2013 FSGP with 193 laps, followed by Illinois State University with 192 laps, and Iowa State University with 191 laps! A total of 11 teams from all over North America competed in the 2013 Formula Sun Grand Prix, racing entirely on solar energy. Our team couldn't have done it without Missouri S&T and Northwestern University who lent us their motors and Principia who gave us tires!

In July 2014, the team competed in the 2014 FSGP and 2014 ASC, taking second and sixth place, respectively. The Phoenix completed 124 laps at the Circuit of the Americas during the FSGP and over 1700 miles on public roads from Austin, Texas to Minneapolis, Minnesota during the ASC. After 10 teams from the FSGP qualified for the ASC only 6, including the OSUSVT, completed the 1700+ miles without trailering.

In January 2015, the team competed in its first international race, the inaugural Abu Dhabi Solar Challenge (ADSC) in the United Arab Emirates. The team raced against fifteen of the top teams from around the world, traveling over 745 miles (1200 km) through the city of Abu Dhabi and the surrounding desert to place twelfth overall. The team would like to thank everyone who supported us and the race sponsors and organizers who made it possible for us to compete in our first international event!﻿

The OSUSVT's second car, the Odyssey, was built between 2008 and 2010 to compete in the 2010 American Solar Challenge (ASC). The team took the car to the 2010 ASC but was unable to compete due to technical difficulties. During road testing in the summer of 2011, the Odyssey's battery pack experienced a catastrophic failure and caught fire, completely destroying the vehicle. No one was seriously injured in the fire, but the team learned a hard lesson about the importance of safety in engineering and solar racing. 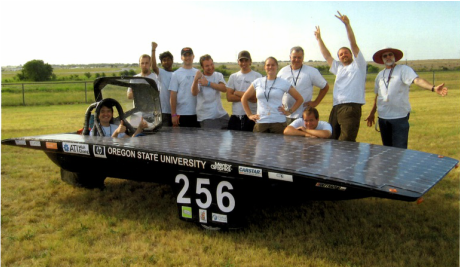 The OSUSVT's first car was built between 2005 and 2008 and first raced in the 2008 North American Solar Challenge (NASC). Built entirely from scratch with one of the smallest budgets of any team in the race (about $60,000), the Rain Dancer was a huge success for the small team and completed the first thousand miles of the 2008 NASC.
✕